In 1958, Life magazine photographed a flight of Manhattan’s preeminent philanthropic matrons for a story billed on its cover as YOUNG LEADERS OF NEW YORK SOCIETY.

Eleborately ball-gowned by Charles James, Mainbocher and Yves Saint Laurent, the new star at Dior, these haughty swans fanned their fathers in a setting carefully selected for its own patrician resonance – the magnificent ballroom of the Winston Guests’ apartment. Looming above the East River on the penthouse floor of a building that was itself a grande dame of commanding and stately elegance, the apartment, with its concert-hall proportions, was a testament to Amy Phillips, Mr. Guests’ mother. On the cover of that issue of Life was a portrait of her successor, C. Z. Guest, standing like a golden arrow before an elaborately carved white marble chimneypiece set with superb Chinese porcelains that has been arranged by Stéphane Boudin, France’s leading grand-manner decorator of the period. George II paneling, stripped from an English manor house, frames the scene. Unseen are a gilded and coffered ceiling and white marble floors, both part of the swag retrieved from the Fifth Avenue château of Mr. Guest’s grandfather Henry Phipps when it was demolished in 1927 to make way for a glamorous new apartment building.

Decades later, when the Guests decided to move the country, the place was taken by Janet Annenberg Hooker, another pillar of society. When she died, the glorious white elephant of an apartment languished for years, by turns dazzling prospective buyers with its ambassadorial proportions but confounding them as to how to transform it into a vital twenty-first-century proposition.

Fast-forward to the first visit paid by Lisa Penny, a woman for whom the word dynamic might have been minted. “It was a mini-versailles!” she recalls. “It had fantastic bones, but its configuration meant that you walked along inner hallways, not along the view, so it was very claustrophobic.” Perr’s ideal was the sixties and seventies, which to her “represent the best art, the best fashion, best architecture, best furniture, and best music.” Perry and her husband called on David Piscuskas, a partner at the firm 1100 Architect, whose elegantly streamlined and thoroughly contemporary vision has appealed to a slew of high-profile artistic souls, among them Jasper Johns, Jacqueline Schnabel, and David Salle. Piscuskas told the Perrys that if they were able to get permission to make some fundamental structural existing floor plan, he thought the space could be made into their dream apartment. Permits in hand, the couple took the plunge.

In the beginning, the apartment’s decorative renovation was carefully respectful of the existing period elements. For Lisa Perry, however, this approach seemed a little too tentative, so she asked her friend the decorator Tony Ingrao to tell her how he would envision it.

“We were all together through the whole thing, and I think that’s why it worked out so beautifully.”

One afternoon soon after, in the spirit of a friend throwing some ideas around, Ingrao duly appeared. “I walked into this palace,” he remembers. “Any European aristocrat would just drop their luggage and say, ‘This is home, and we’re happy with it the way it is.’ But Lisa had a different vision. She needed someone to translate her look into the space.”

Perry was also agonizing over that coffered ceiling. “The ceiling has to go” was Ingrao’s parting shot. To his considerable surprise, the telephone rang at seven o’clock the following morning. Lisa Perry had spent a sleepless night considering his concepts, and she was calling to bring him on board. “It really was a three-way collaboration between David, Tony, and me,” says Perry. “We were all together through the whole thing, and I think that’s why it worked out so beautifully.”

Once the Perrys had reconciled themselves to the fact that their three-month renovation had suddenly become an eighteen-month masterwork, Piscuskas says, “what we were trying to accomplish got leaner, sleeker, and more adventurous.” The apartment also had to make sense for the Perry’s lifestyle. “With their two teenagers, they needed a TV room and a big kitchen – all those things that didn’t exist before,” Ingrao adds. Gradually, the apartment’s illustriously provenanced features were stripped away and sent to auction.

Ingrao suggested switching the central dining room and the kitchen. “The kitchen had no view, nothing,” remembers Perry, “and I’ve always loved the idea of the kitchen being the heart of the home. So for me, that was a major change, and now of course as a family we spent most of our time there.” Ingrao painted the intimate dining room black, and the Perrys hung an Op Art Bridget Riley and a highly colored Michael Craig-Martin to ignite the space.

It is perhaps the progressive spirit of the sixties that attracts Lisa Perry to that decade’s aesthetic charm, which she grew up with.She was raised outside Chicago, she says, in “a very modern house, a glass box with a huge swimming pool in the middle,” designed by a follower of Frank Lloyd Wright. “There were no doors. All the rooms closed with Japanese shoji screens. My mom had a modern-art gallery. My dad painted as a hobby, and our entire house was filled with his art.”

For Perry and Ingrao, there were two particular models of inspiration for their decorating scheme – Gae Aulenti’s steel-walled seventies Milanese apartment and an exhibition that had recently been at the Cooper-Hewitt on the work of the visionary mid-century designer Alexandre Girard. “I just knew that I wanted this to be a fun environment,” remembers Perry. “I wanted a sunken living room. I wanted that feeling of those cool airport lounges and of airplanes with their flight attendants, so modern and futuristic in their Pucci outfits!”

For practical construction reasons, Perry did not get the sunken conversation pit in the living room. In its place, Ingrao invested a chain-link of white leather sectional sofas. “It’s a perfect space for entertaining,” says Perry.

“Lisa needs graphic punch,” says Ingrao. This meant that the library, for instance, was given a bold David Hicks-ian treatment in black, white, and red; it complements an eye-popping Vasarely in the gallery beyond.

The immense second-ballroom space was carved up into two new chambers. One became the astonishing spaceship-white master bedroom, which, with its sculpted white shag-pile carpet and marching vinyl headboard, might be a place where Jane Fonda’s Barbarella would entertain the angel Pygar. The other is now a TV lounge with all the dash of sixties Playboy Club, down to its lacquered Coca-Cola-colored walls and Pucci upholstery.

As the apartment began to take shagadelic shape, the Perrys started to look more closely at Pop Art and decided to focus their considerable art-collecting interests on the finest practitioners of the movement, They worked with some of the leading specialists in the field to hunt down exceptional pieces. Their collaborators included art consultant Michael Steinberg, Dominique Lévy of Christie’s, and the London-based art dealer Thomas Dane. “The collection also extends beyond Pop to embrace other aspects of what was going on in the sixties,” Dane explains. It includes works by contemporary artists whose work is infused with a similar sensibility, from the venerable Michael Craig-Martin to Cool Britannians Julian Opie and Gary Hume. “Lisa’s obviously very interested in women artists,” adds Dane, “so Bridget Riley, who was so much a part of the sixties London movement, is represented, as well as Pauline Boty, the only British woman Pop artist, who tragically died at the age of 28.”

PErry’s other great interest is politics. She is on the board of the Democratic Senatorial Campaign Committee and devotes the majority of her time to “helping women get elected to public office and to keeping a Democratic majority in the Senate and the House.”

On a recent summer afternoon, the Beatles’ “All You Need Is Love” saturated the sound system and afternoon light streamed through the Perrys’ extraordinary spaceship for modern living.

“I wanted people to come in and smile, especially after September 11,” Perry adds. “People have said to me, “This place is Barbarella meets Austin Powers,’ and I say, ‘Great,’ because when I picture that – how fun!” 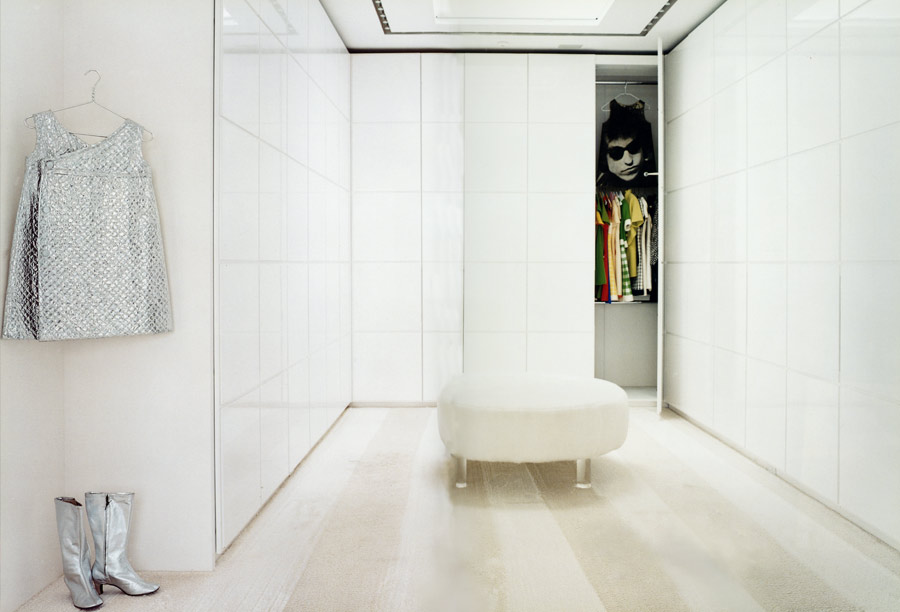 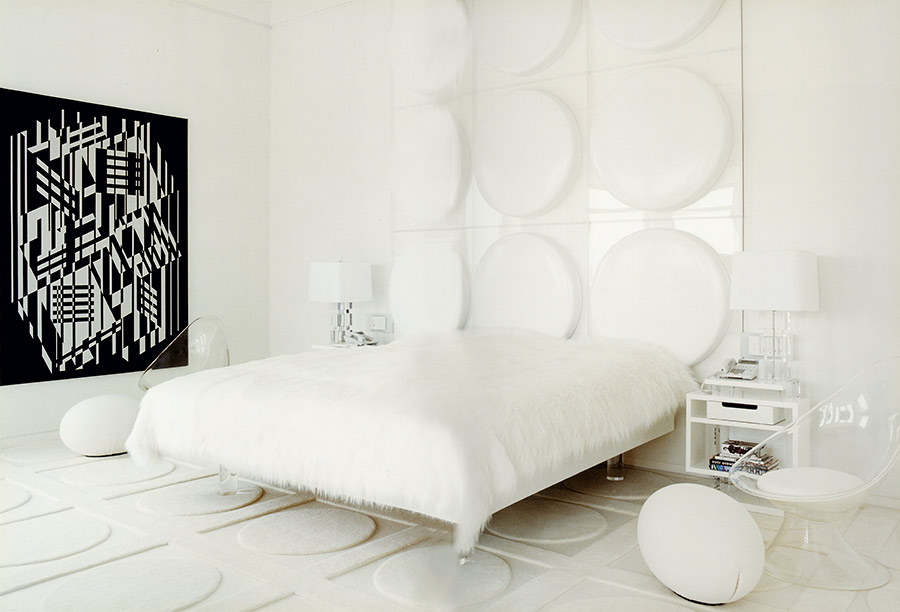 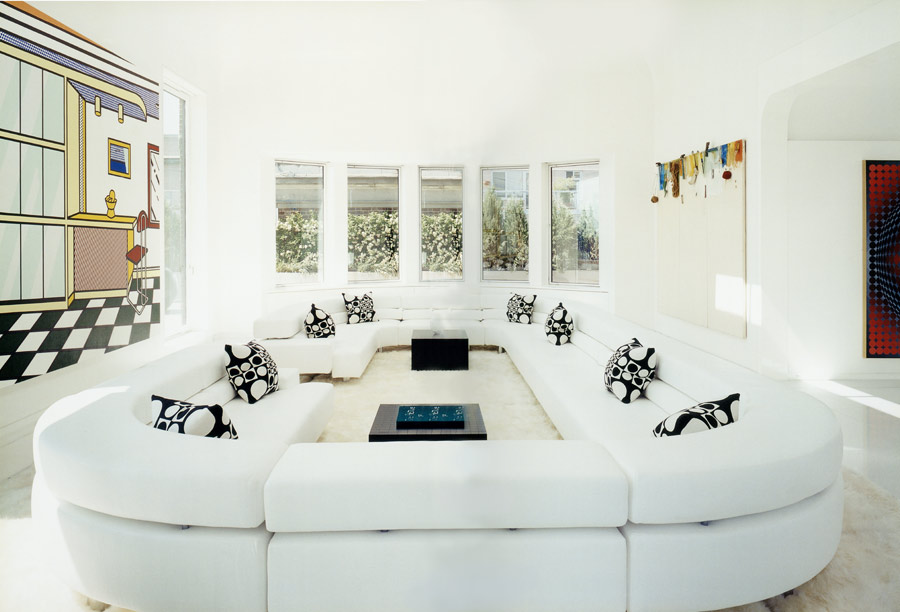 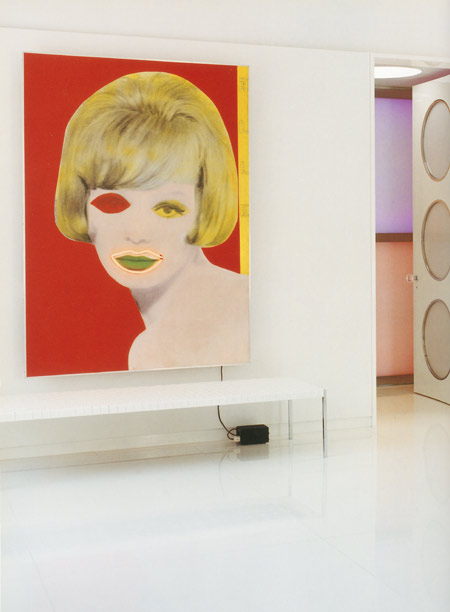 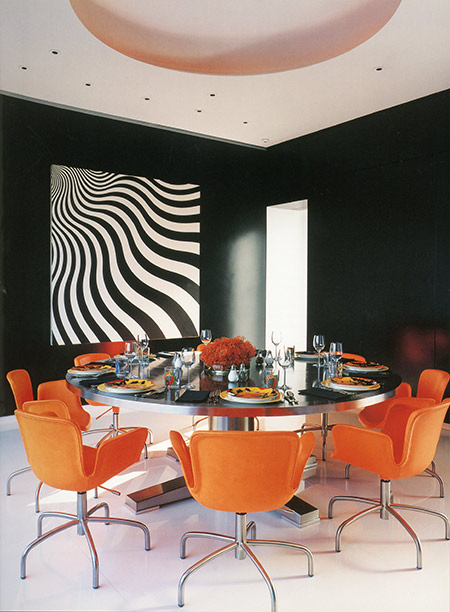