At first, the story does not sound Hamptons glamorous. Three years ago, interior designers Tony Ingrao and Randy Kemper, partners in life and work, bought a four-car-garage in East Hampton, New York, on 3.9 acres of land (some of it taken up by a long driveway), situated pretty much right in the village. “A carriage house?” I suggest, thinking this might give a more seductive patina to the story. “No,” says Kemper. “This was definitely a garage. Stucco.” Oh, and the garage had been on the market for three or four years. The backstory however, is much more seductive.

Even today, the name Mary (Mrs. Lorenzo E’) Wodehouse resonates in East Hampton. She and her husband moved here around the turn of the twentieth-century and built an estate called the Fens. They proceeded to become the town’s most noted benefactors, donating the library, Guild Hall (the town’s theatre and art museum), land, and much more. On the original estate, Mrs. Wodehouse built a grand-scale- Elizabethan-Style playhouse, which, after her death in 1961, was parcelled off and sold as a separate estate.

Also on the original estate was the stucco four-car garage. The back of this parcel bordered an 18-acre nature preserve, right between the village and the ocean, that Mrs. Wodehouse had also donated to the town.

When Ingrao and Kemper first saw the land, you could not tell the property’s end from the preserves beginning. The preserve was the perfect borrowed scenery, but they needed to distance it and also tame the land on their side. They had previously collaborated with clients on landscaping projects, but this was the first time they had created a garden from square one.

The first year, they renovated the garage and studied the light as the seasons passed. They examined the existing trees and, in the end, kept only four of them and moved several others. They also decided to work around, instead of against, the many deer that also called the place home by not emphasizing flowers. They wanted year-round texture and scale and, as Ingrao puts it, “spires, waves, and bollards.” They also wanted, Kemper adds, “to create a surprise.” And they have.

You can visualize their plan by thinking of the shape of a nautilus. At the top spiral of the property is a circular red-gravelled driveway and a courtyard from which a tip of roofline is just visible. The back of the nautilus is where the gardens open up, and as she shell curves, it houses the cottage and a sunken garden. In summer, the scent of potted gardenias and the sound of fountains at the edge of the round lilt pond guide you down to an intimate brick-walled space. (Flowers do fine here; deer don’t like steps.) The brick echoes both the red gravel in the driveway and the color of the pool’s concrete coping. Though stone also appears in this garden, the red is especially well chosen; it offsets the green in summer and highlights the textures during the rest of the year.

The scale of the sunken garden is cottage-sized, and the plantings and classic decorative objects (lead statues, cubes and balls of iron and limestone, and stone benches and tables) hold to this scale all the way around the house, reinforcing the sense of cottage domesticity.

When you turn another corner, however, the scale changes:a bigger view and a bigger point of view. The property had originally been sloped, and Ingrao and Kemper had it terraced to preserve the sense of a hill and also create flat lawns as you make your way to the top.

The plantings are ebullient here – the waves and billows that the designers had hoped for. Clusters of shrubs and trees are anchored with evergreens to hold their structure throughout the winter. Where you would ordinarily see an isolated Japanese maple, numbers of them are massed here, so they seem to float down the hill like horticultural hoop skirts. And if you think you can’t have arborvitae with deer, you are wrong. You can underplant it to grazing level with something the deer won’t eat, like boxwood.

This is a garden that weeps, especially in the grove around the pool area, with its planting of weeping blue Atlas cedars. These hold their color all year long, even as many of the other plants up and down the hill take on seasonal hues both subtle and dramatic.

The music for this garden? Mrs. Wodehouse, of course. She surely would have loved it.

Produced by Cynthia Frank
Photographed by Christopher Baker
Written by Cheryl Merser
Cheryl Merser is a writer based on long island. 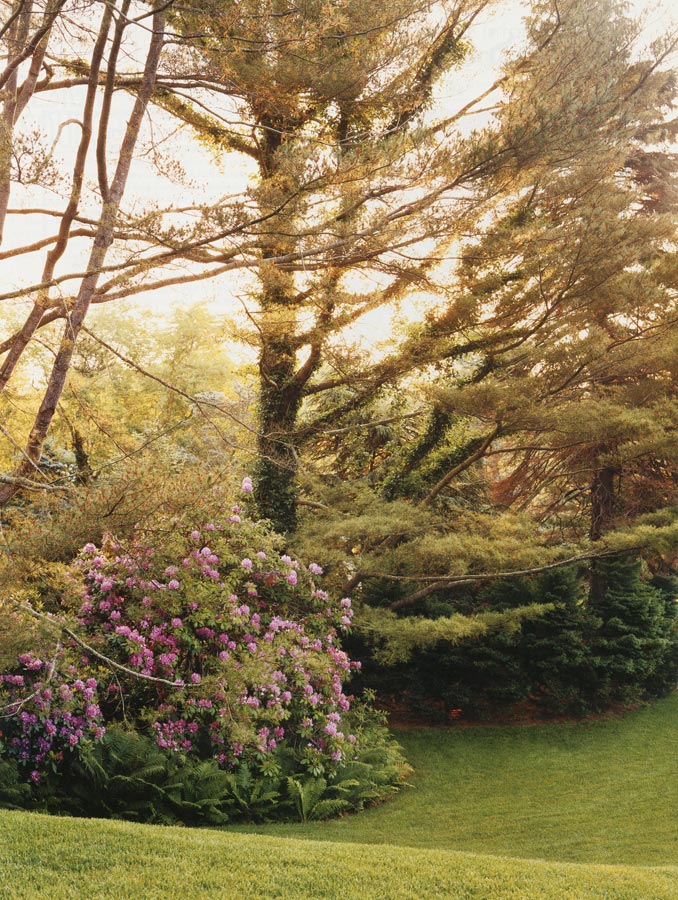 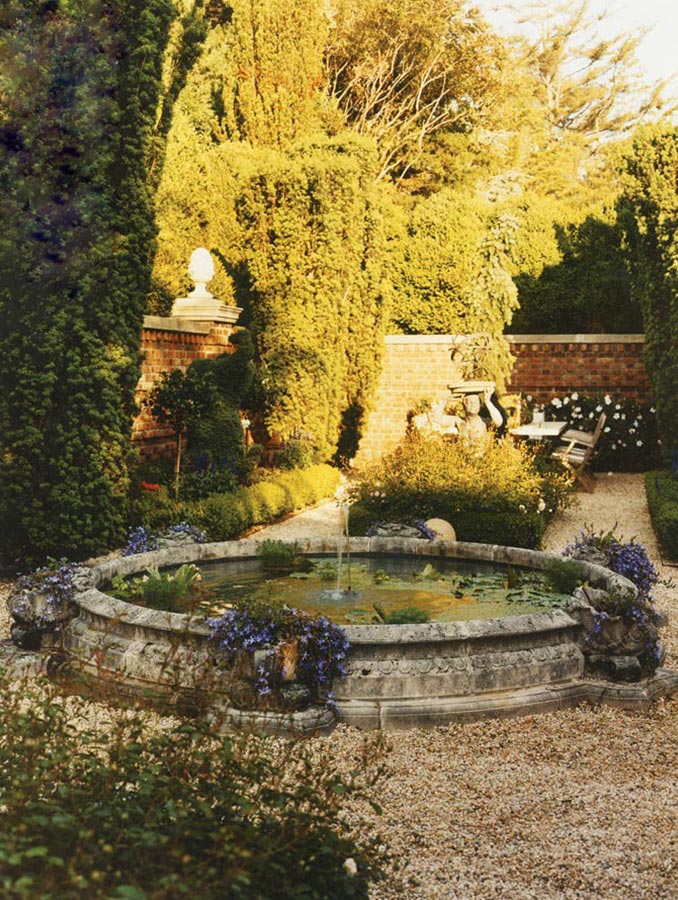 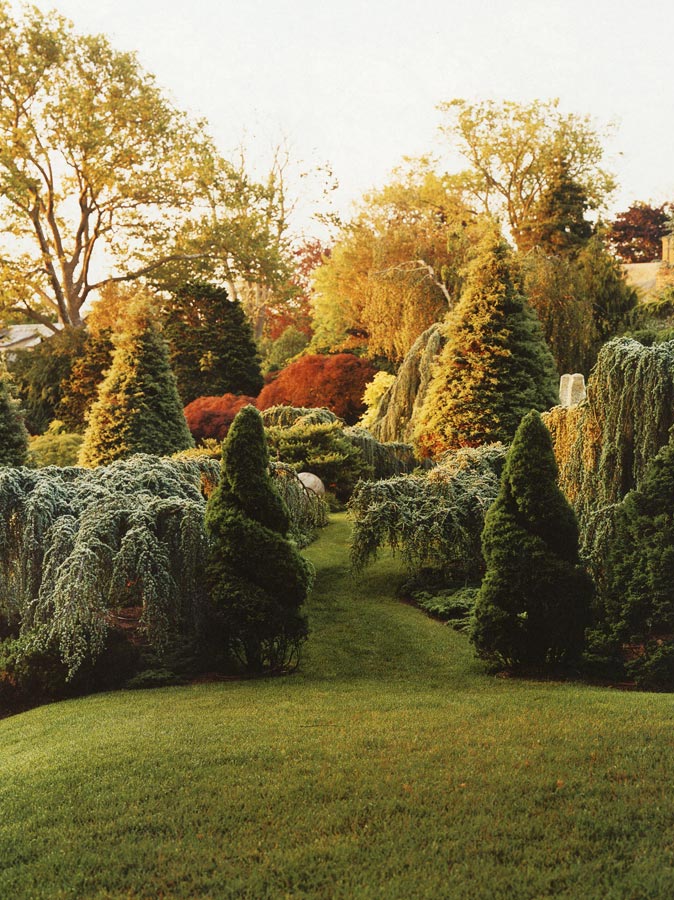 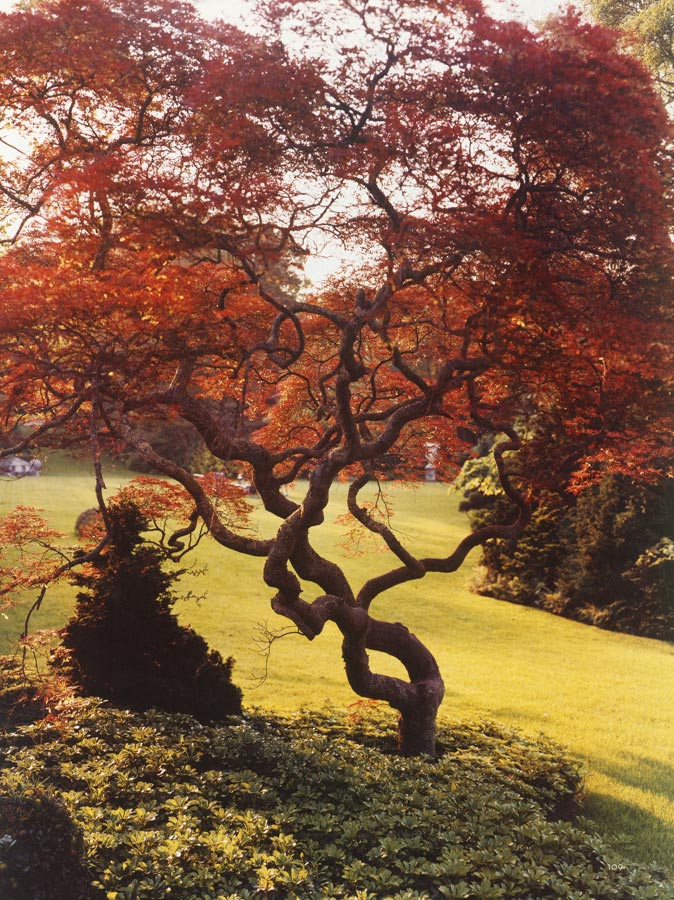 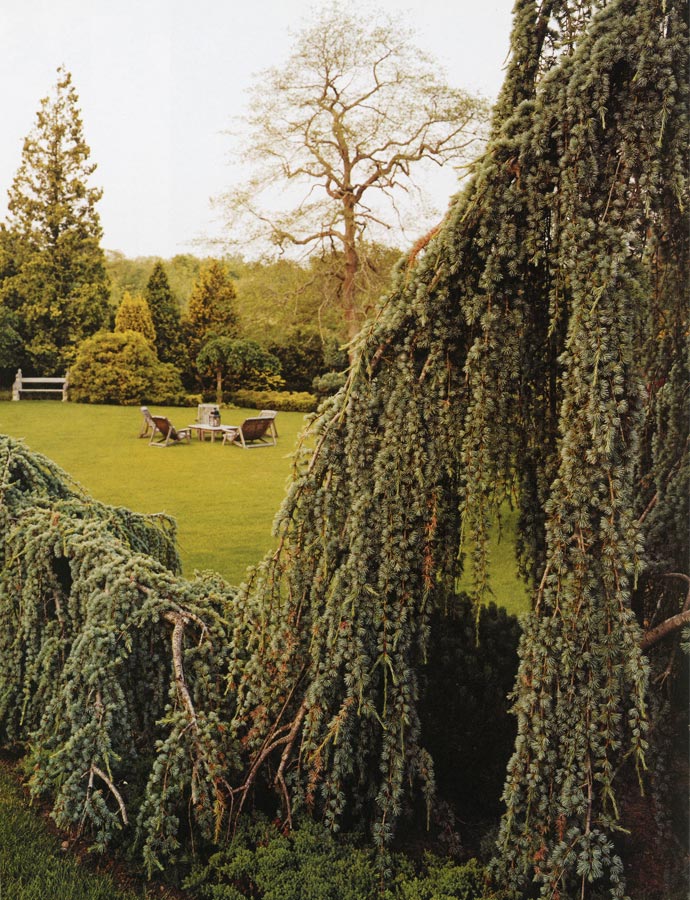 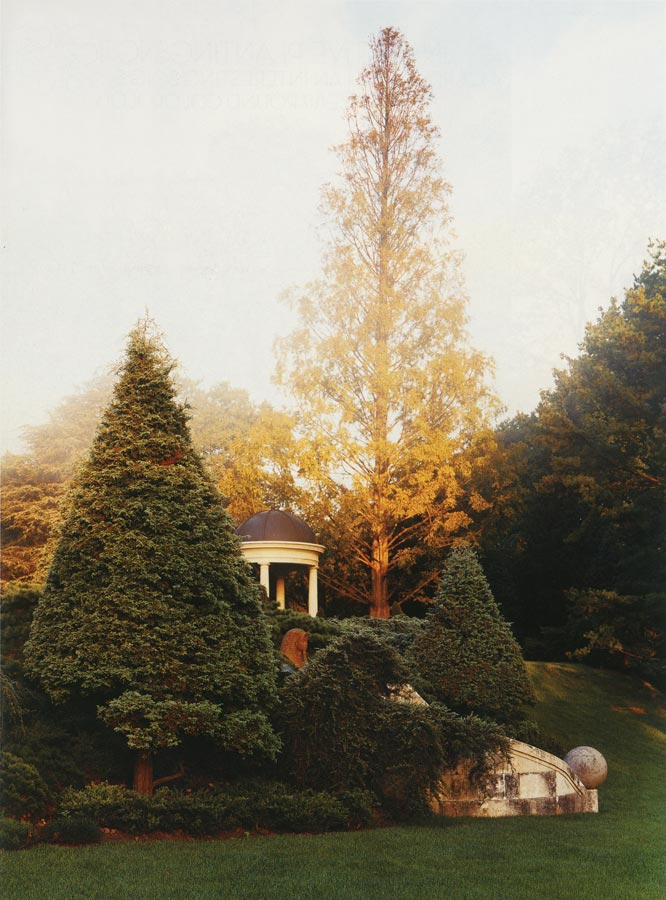 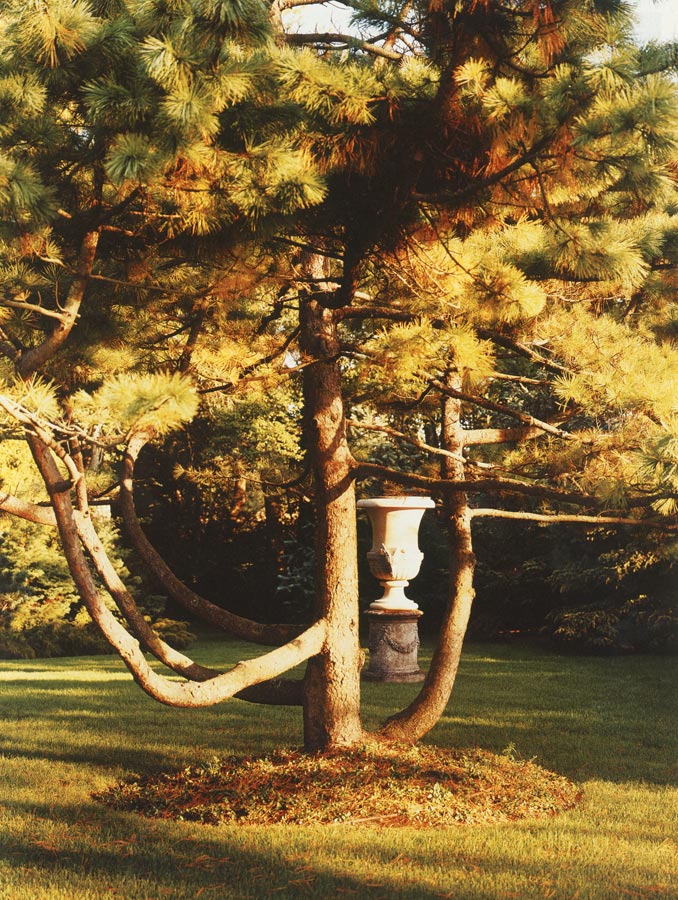