Everyone’s fantasy is different,” says interior and architectural designer Anthony Ingrao. “I specialize in creating moods.” So he was undaunted by clients who were smitten with the possibilities of an old estate in Connecticut. Ignoring inappropriate additions (one of which houses 11 dormitory-style bedrooms) and the fact that you didn’t enter at the entry hall, the couple focused on the Gothic details – a vaulted and beamed ceiling in the living room, leaded windows and stained glass, and sixteenth-century paneling in the dining room – and the setting of the stone house atop the highest hill in the area. “I walked through the front hall and out the back door to the lawn and said, I want to buy this house,” the husband recalls. The couple imagined the place as an old-world country estate. “We wanted people who pulled into the driveway to think they were in England,” the wife says.

To make their fantasy a reality, the couple needed Ingrao. They had seen his powers of transformation – achieved through architectural elements, decorative painting, and acute attention to period details – in the Norman-style manor house of friends, and knew they wanted him from the start.

Any good fantasy requires careful construction. This one took five years, Serving as an architectural and landscape designer, Ingrao resculpted the ten acres of land and rebuilt three-quarters of the house adding nearly 10,000 square feet. He bought gates, paneling, archways, windows, and walls, in France, Britain, Italy, and Germany. He used paint made with ground limestone to create the illusion of stone walls. Three old barns were bought from Vermont so that Ingrao would have plenty of antique oak and chestnut at his disposal. The owners were equally passionate. “I used to stay up half the night reading books on landscaping and castles,” the husband says. “Then I’d say, this is what I like, this is what I don’t like.” The biggest challenge was balancing the heaviness of the architecture with the lighter spirit of a modern family. “They didn’t want to feel as if they had to have a dinner party to use their living room,” says Ingrao. He opened up spaces and created views wherever possible: “We tried to add light and bring the outside into the house.”

“You go on a trip before you get to the house, it’s like driving through the English countryside.”

The mood that Ingrao ultimately created has all the drama of a gothic novel, with none of the gloom. It begins at the street. Ingrao mapped out a curving drive that took in the apple and pear orchards, the pleached lindens and fields of grasses. “You go on a trip before you get to the house,” he says. “It’s like driving through the English countryside.” The clean, sophisticated gardens of boxwood parterres add to the seventeenth-century English ambience, though there are some French accents, such as a rose garden modelled after the one at Bagatelle.

Visitors now arrive at a new entrance with formal stone court and grand stone portico. From the front door, “you can see straight through to the seventeenth-century fountain in the back,” says Ingrao. “You can always hear the water moving.”

The living and dining rooms were the only two rooms not completely renovated but both needed updating. “It was very spartan and dark,” says Ingrao. He added a sun porch off the living room by enclosing what had been an outdoor patio. “Before, it felt like a church – it didn’t work.” says Ingrao. “The sun porch made it liveable.” He achieved the same effect in the dining room by adding a breakfast room. He also lightened the beams and the paneling in both rooms. To further soften the spaces, Ingrao used unexpectedly gentle colors such as beige, rose, and apricot in the furniture.

That same softness is evident in the master bedroom, which carries the house into the eighteenth-century. “They wanted something a little sweeter there,” says Ingrao.

So while he added a beamed ceiling like the one in the living room, he also filled the room with pretty details. The French Régence fireplace came from Aix-en-Provence, and the bed linens were custom made in France – silk for the canopy, embroiled cotton for the spreads. New windows add more light and provide a view over the gardens from the bed.

For the newly constructed pool house, “we canted something fantastic, with a summer mood,” says Ingrao. He designed the octagonal space around three gates from an opera house in Lyons. The originals fill three inner arches, and three copies open to the outside. The decorative painting on the ceiling was inspired by the frescoes in a summer palace in Mantua by Renaissance painter Andrea Mantegna.

The owners say their vision has come to life. “There’s a great sense of balance -of design and landscape architecture,” says the husband. “It looks as if it’s been here hundreds of years.” The fantasy is complete. 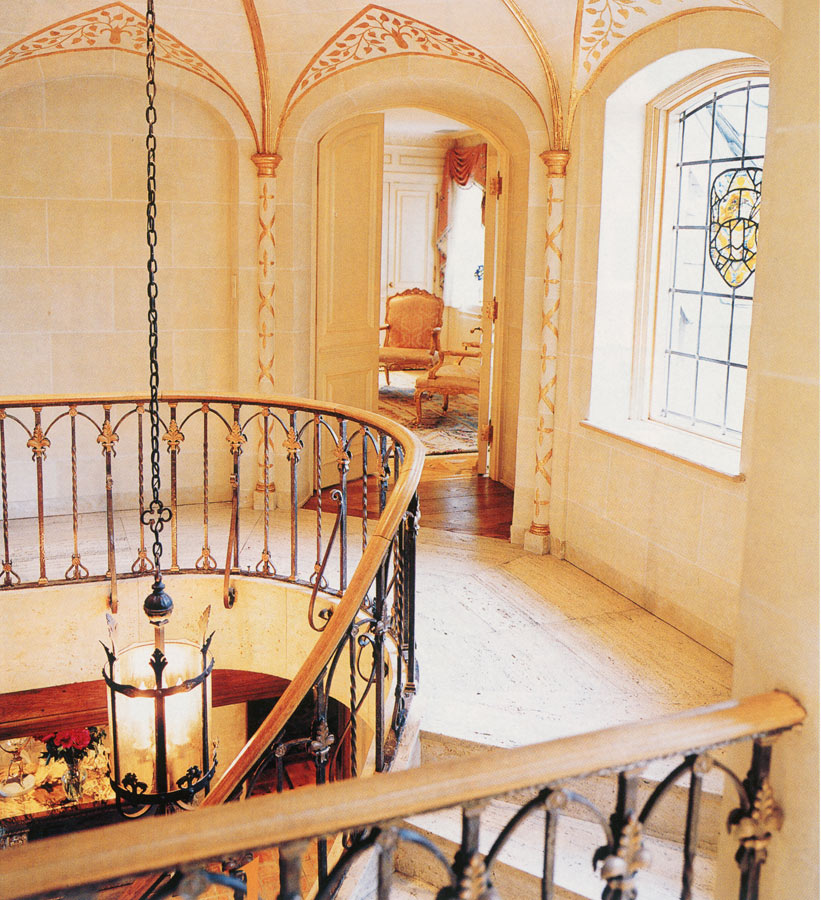 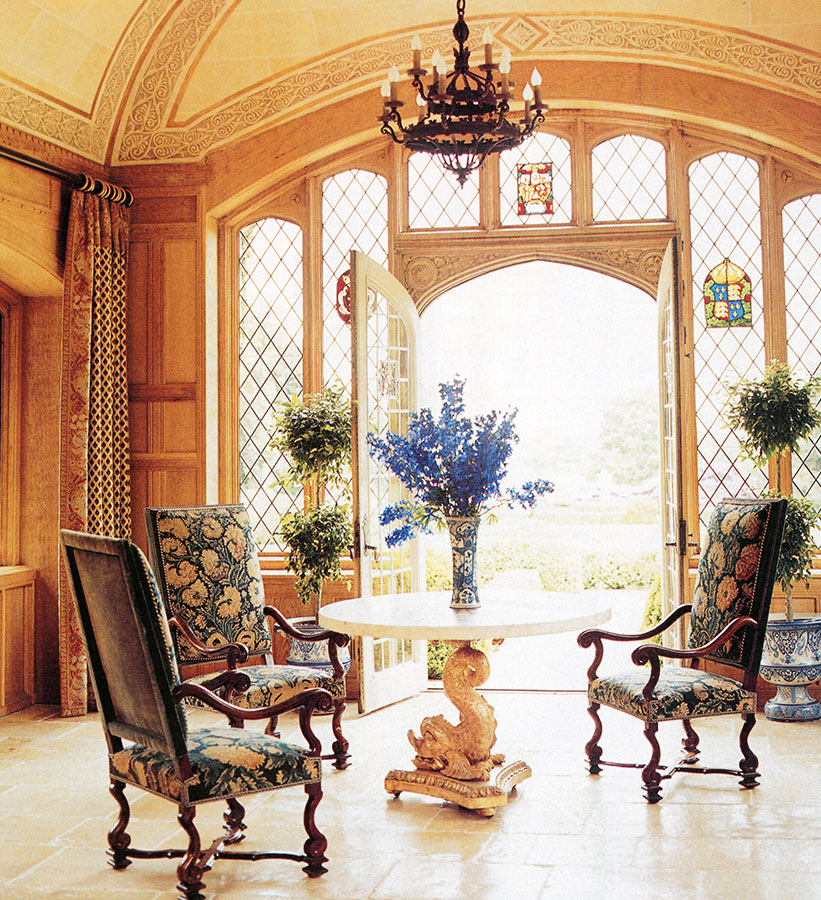 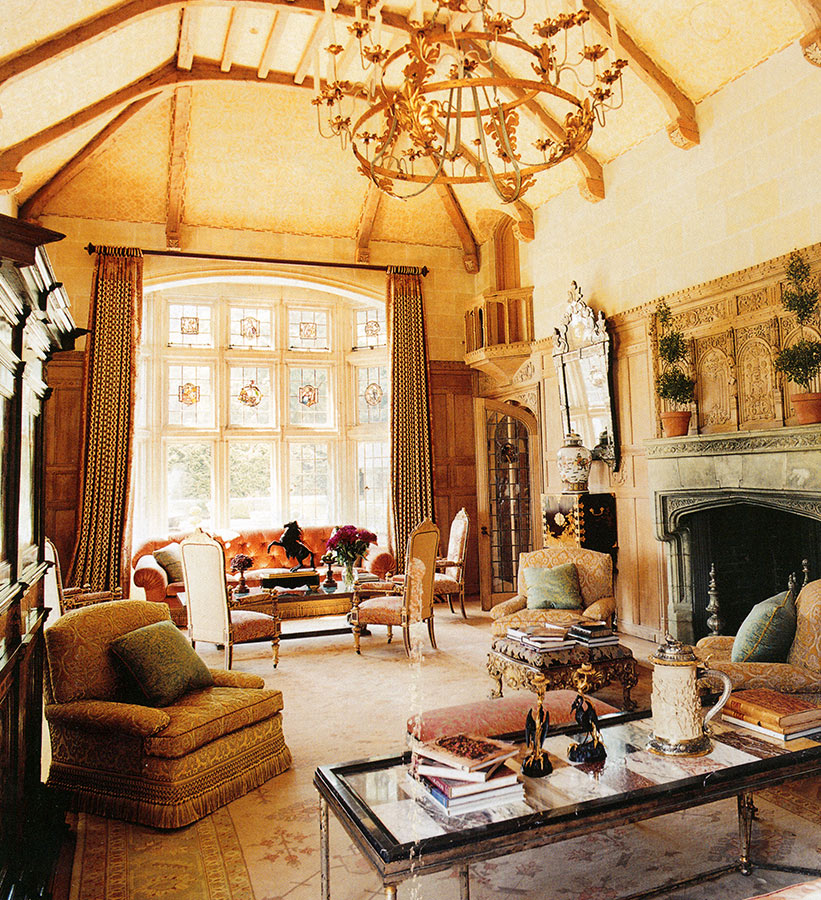 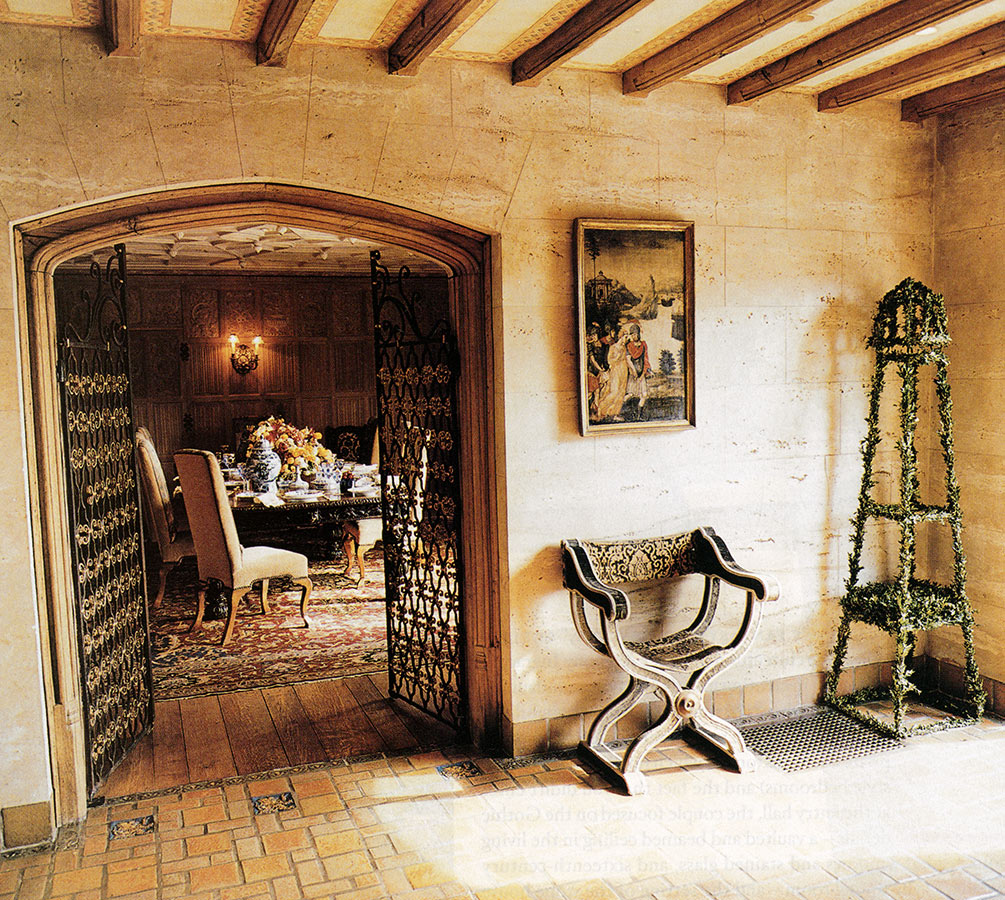 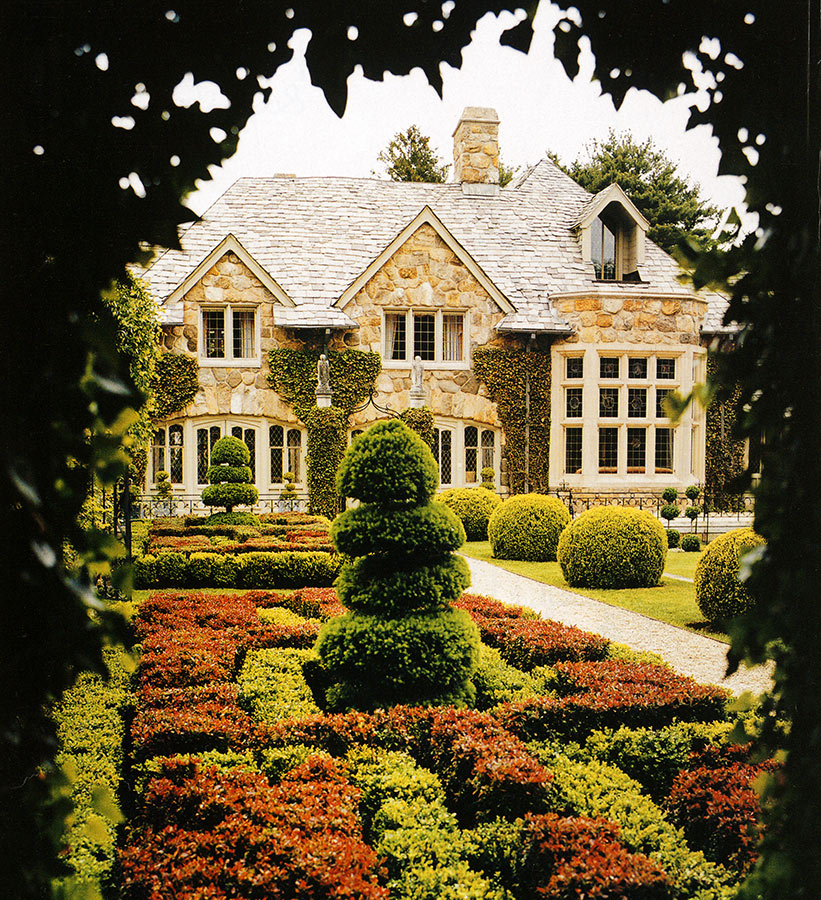 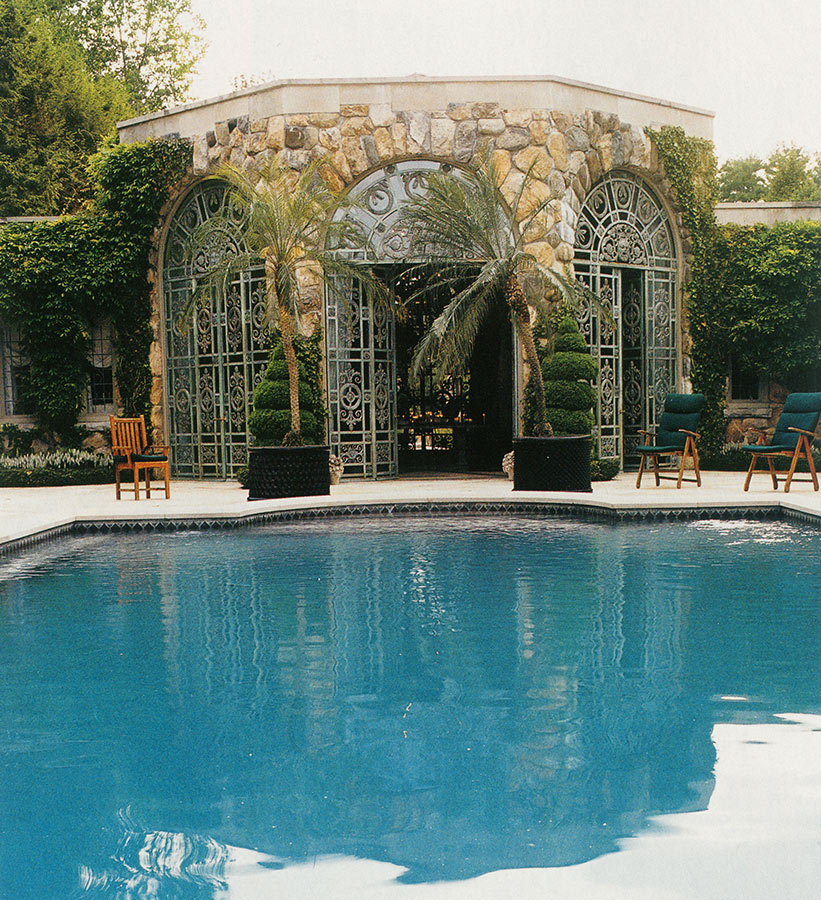 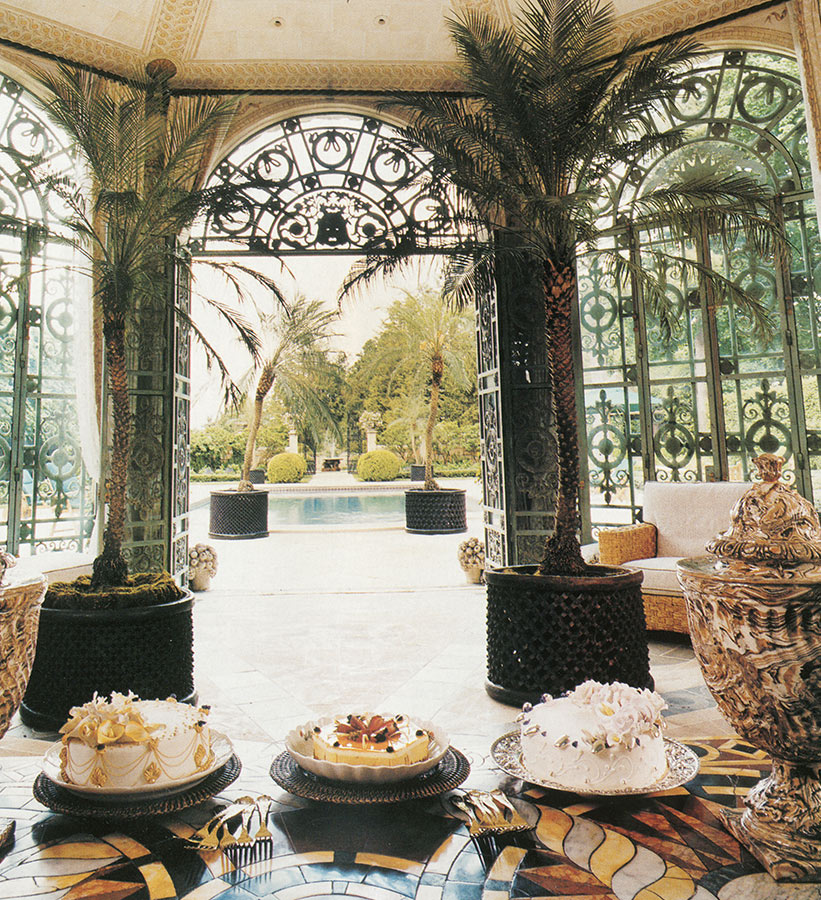 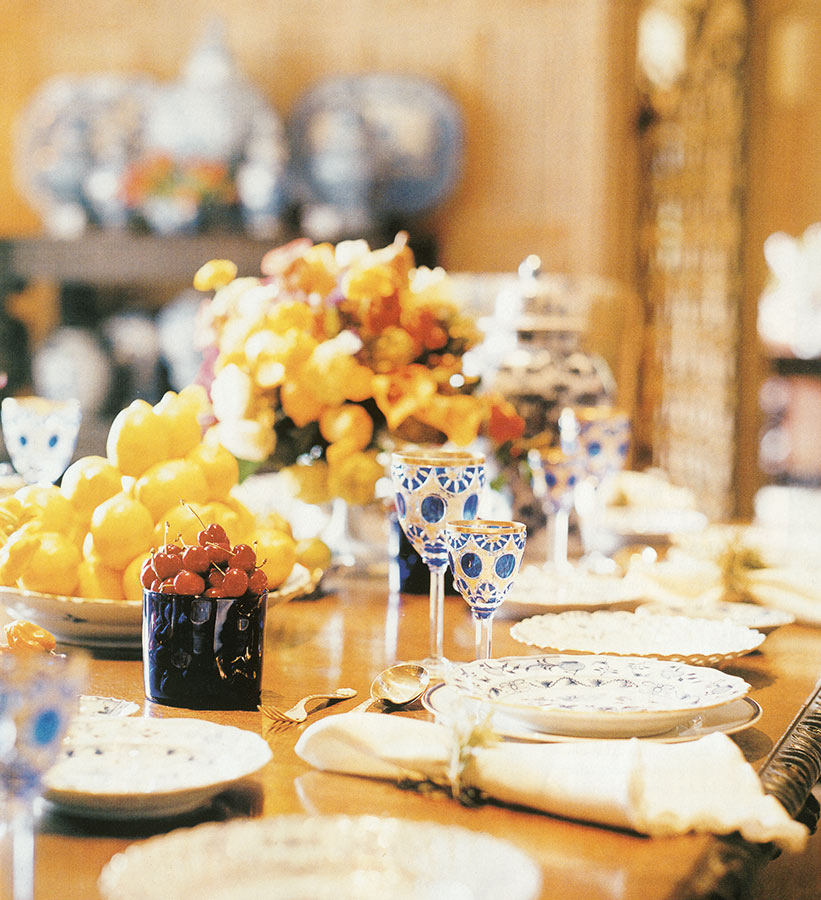 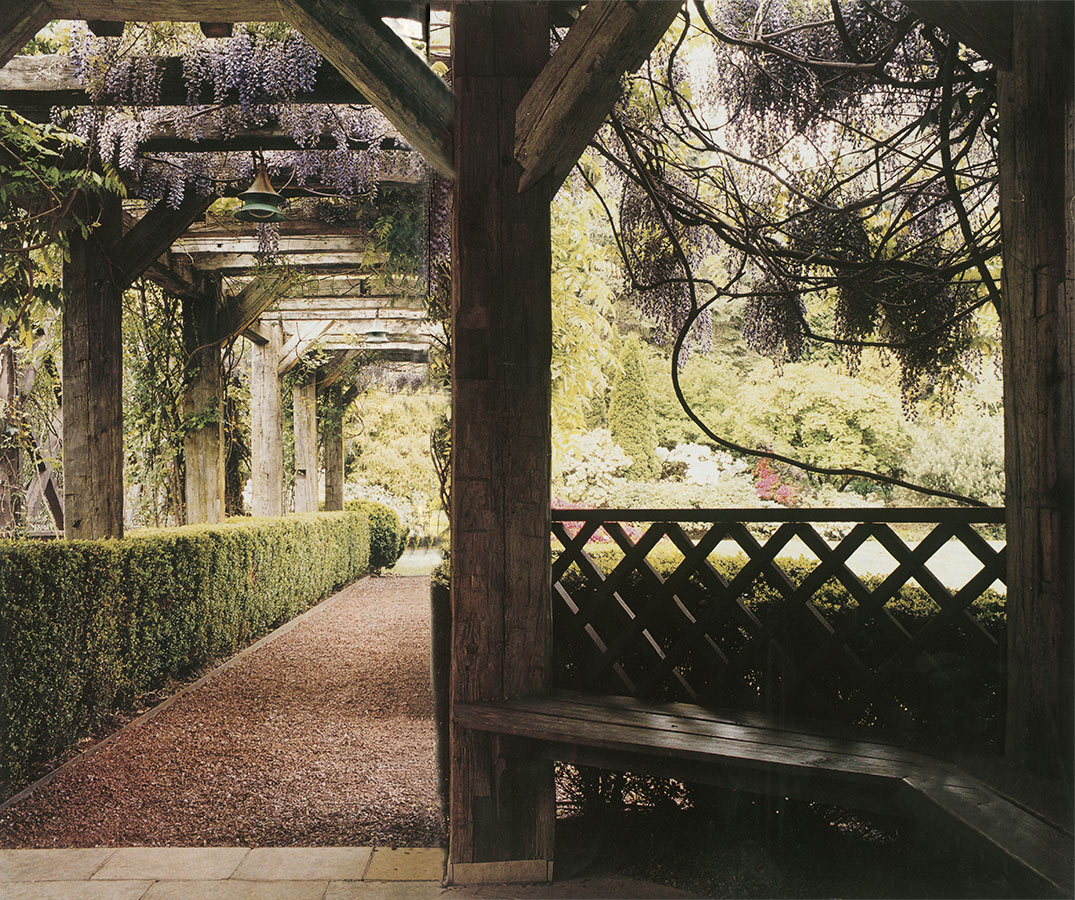