The Resurrection of Stone House

Stone House has quite a history. Perched high on a cliff over the Atlantic, the Montauk residence on eastern Long Island was originally built as a restaurant for oceangoing travellers in the early nineteenth century.

It was enlarged in the early 1900s for a member of the Morgan banking family by Grosvenor Atterbury, an associate of architect Stanford White. Since the 1950s the house has been occupied by Marilyn Monroe and Joe DiMaggio and John Lennon, among others, and is cited frequently in Andy Warhol’s infamous diaries.

When designer Anthony Ingrao bough Stone House and its twelve acres in 1987, it had fallen into disrepair. “My priority was to rehabilitate the property and make it comfortable for year-round living,” says Ingrao. After an extensive renovation that took three years, Stone House burned in 1991. “The only thing left was the living room rug, which which was out being cleaned when the house caught fire,” he says. “The upside of the fire was that having already decorated a house once, you learn what you really like and what you wouldn’t do again. It’s a process of refining.”

The second time around, Ingrao decided to make some major changes. “My approach was to try o create a rustically casual environment with every modern convenience,” the designer says. “Sort of a low-tech shell concealing a high-tech philosophy.” An example of Ingrao’s adaptability is seen in the leaded seventeenth-century-style mullioned windows, which are made of Thermopane for added insulation. A computerises central stereo, alarm and climate-control system is concealed behind the antique paneling and ceiling beams throughout the house.

The main living area contains old pegged floors, rock walls and beam ceilings, all selected individually and placed by Ingrao. “I was a bit particular about where each board went,” he notes. ITALIC Eclectic ITALIC is an appropriate word for Ingrao’s choice of furnishings. “I purchased pieces from all over the world,” he says. “The 1050s French chairs were designed by Adnet for Hérmes, the rough wood table is part of a suite of sequoia furniture from California, the carved wood chair is Kenyan and the twig table is nineteenth-century English,” Accessories also run the gamut from a nineteenth-century marble horse’s head to eighteenth-century faience lions. 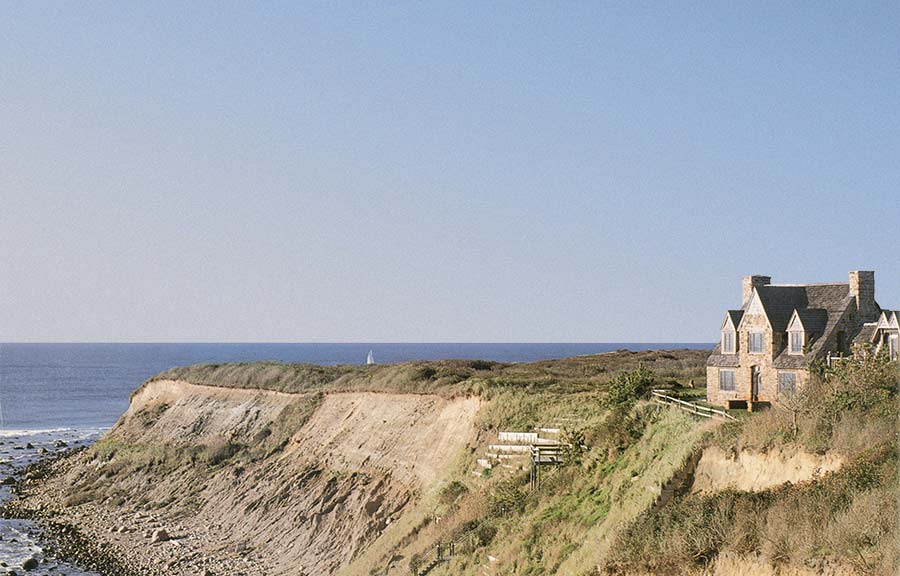 The adjacent media room continues the living room’s diverse theme. Sound-system speakers are concealed in eighteenth-century beams. Ingrao bought seventeenth-century French limestone floors from a château outside Lyons and installed radiant heating underneath them for warmth. “Obviously I like an unusual mix of things. Hopefully it all works,” he says. The media room contains everything from a Regency tea table to American Arts and Crafts planters.

“In the dining room I assembled a collection of painted furniture,” Ingrao says. “The Queen Anne-style chairs are painted American.” For the kitchen, Ingrao concentrated on what he describes as “slightly battered” furniture. “I never restore anything for myself – there’s nothing more wonderful to me than the patina of age,” he says. Accordingly, an enormous though slightly worn nineteenth-century cabinet dominates the stone-floored room. Nineteenth-century English stools surround the island counter that divides the kitchen into cooking and informal dining areas. Ingrao used antique English hardware and doors to add to the country mood. Industrial-size stoves and refrigerators supply ample cooking and storage space for large parties. “I also like the contrast of the modernity of the appliances with the antiques,” notes Ingrao.

In renovating the house after the fire, Ingrao broke through the attic to create his master suite and bath. “I tried to keep the background of the bedroom primarily American,” he says. “I found a quantity of eighteenth-century boards from a barn in Vermont and lined the bedroom with them.” A chestnut plank floor adds a certain visual, as well as literal, warmth. “Some things are very rare and some are humble – it makes it more visually interesting,” says Ingrao.

“The bedroom is also notable for its panoramic views. “The best thing about the reconfigured upstairs is the 360-degree view of the grounds and the sea,” says Ingrao. “Plus I get marvellous cross breezes all year round.” Like the kitchen, the master bath, with its antique fittings, houses the utmost in modern accoutrements – a steam room, sauna and spa.

The former gym off the bath has been turned into a guest bedroom. “I furnished the room with American Aesthetic Movement furniture,” says Anthony Ingrao. “The most interesting piece in the room is the tapestry on the bed. It’s a seventeenth-century Dutch work that depicts the eastern seaboard of the United States. In many ways it epitomises my whole approach to designing this house: quirky pieces with interesting pedigrees that work in harmony.” 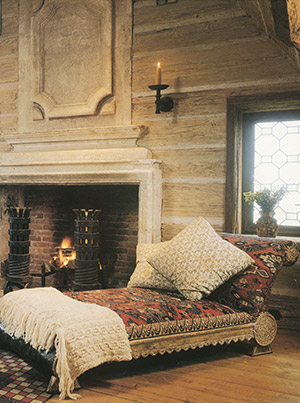 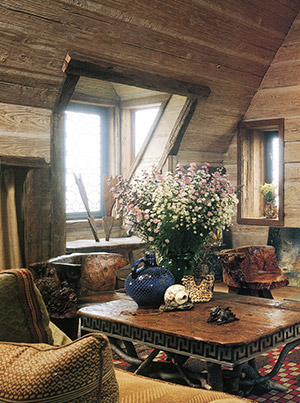 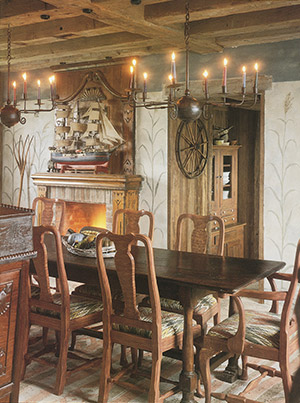 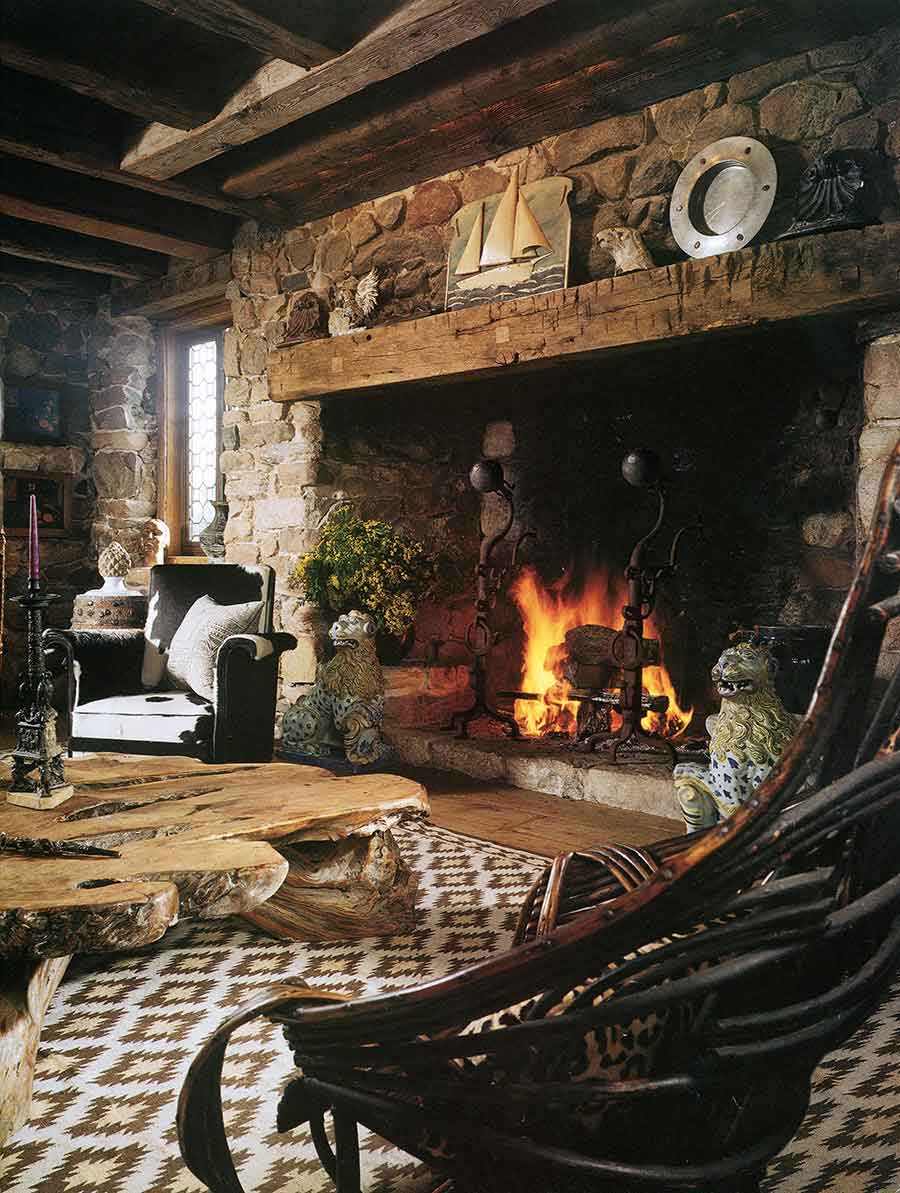 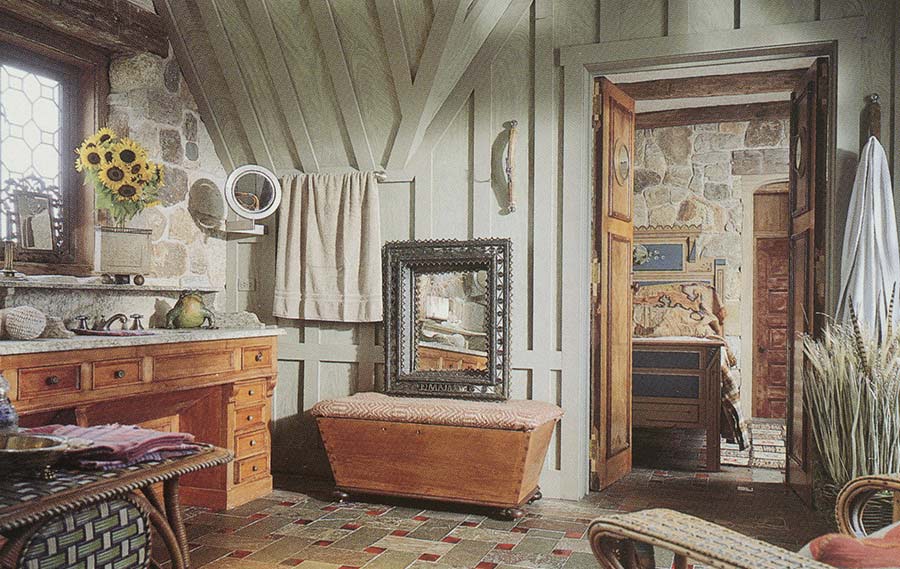 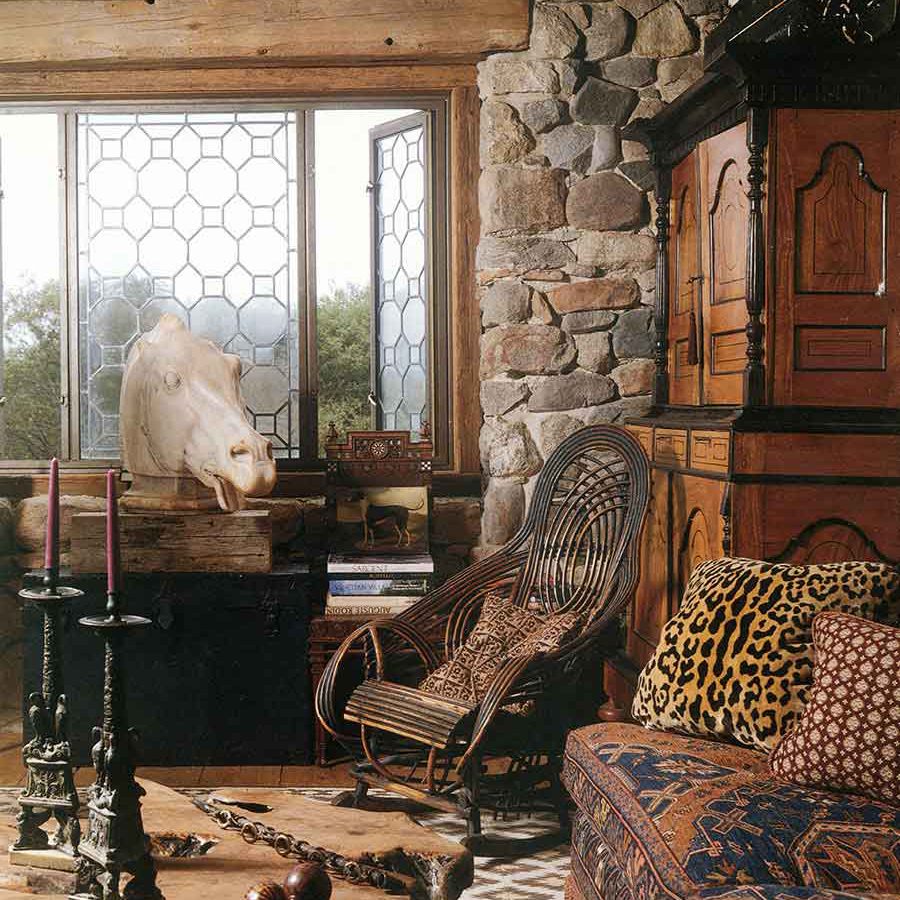 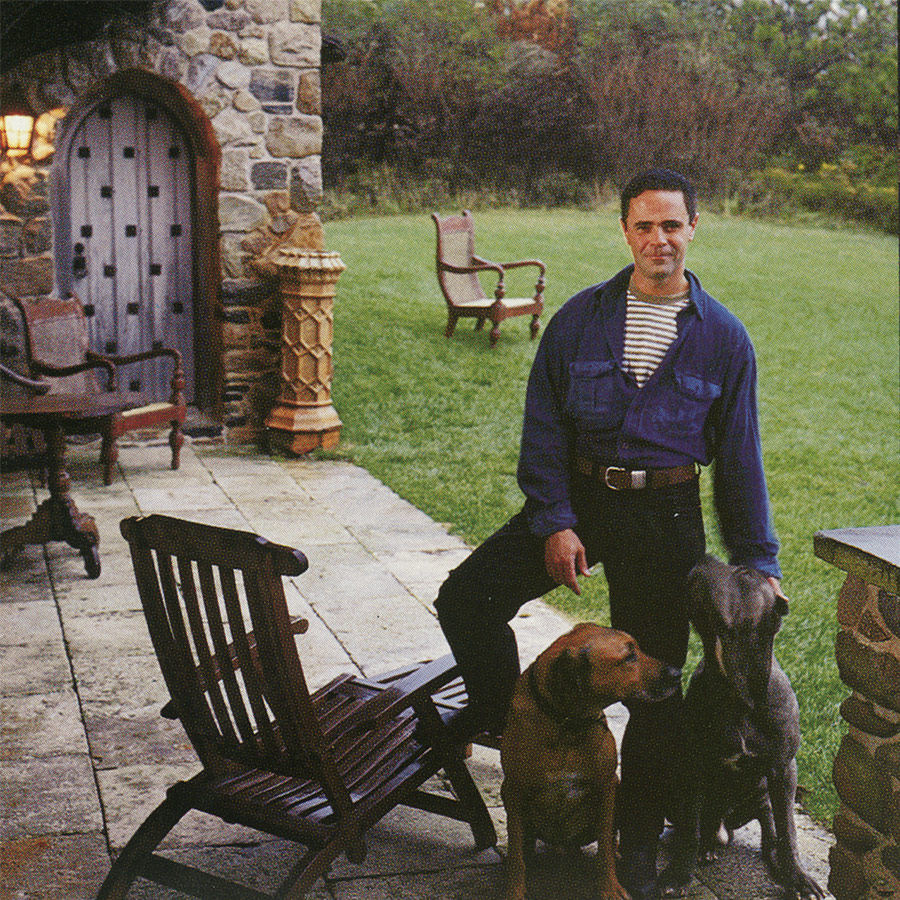 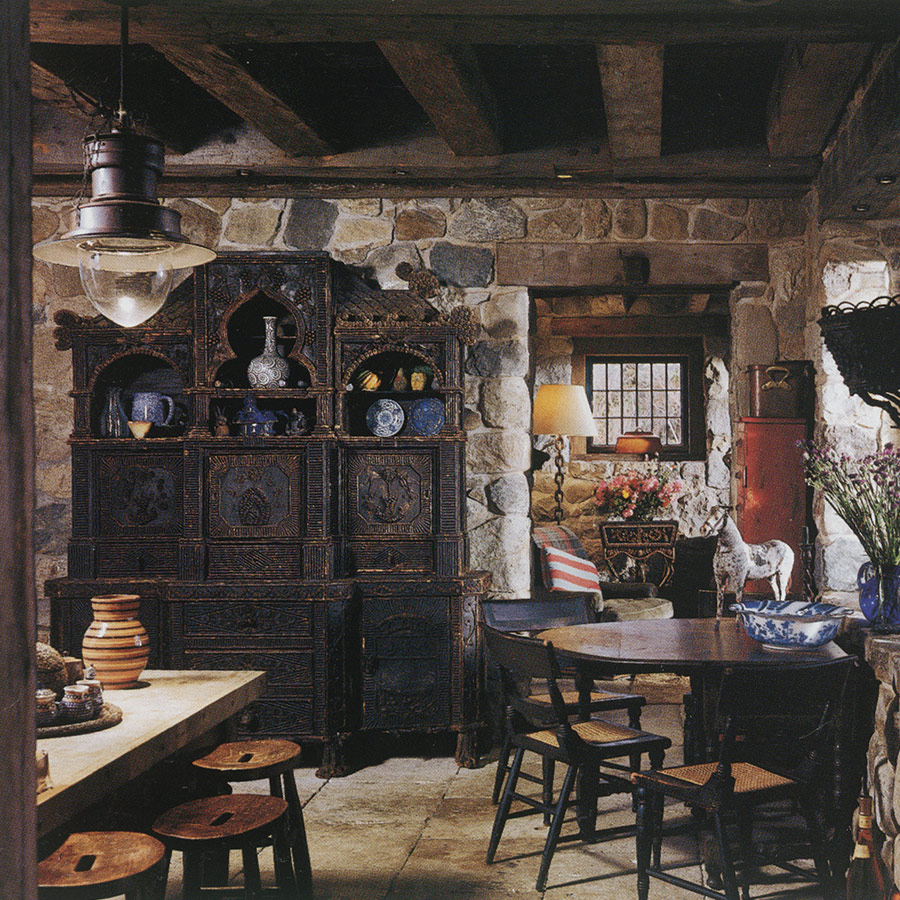