A radiant setting in their penthouse high above Central Park, jewellery designer Kara Ross and developer Stephen Ross cultivate an air of warmth, glamour, and sophistication.

It’s a thrilling time for residential architecture in New York. Not since the Jazz Age have so many ambitious high-rise apartment buildings shot up around the city, including recent examples by Frank Gehry, Norman Foster, Jean Nouvel, and Rafael Viñoly—all of them competing to make striking architectural impressions while pushing the levels of luxury to new heights. Few players have had a bigger role in this boom than the Related Companies, the real-estate behemoth behind the current Hudson Yards development and, before that, the Skidmore, Owings & Merrill–designed Time Warner Center, among the first of this latest generation of skyline-altering projects.

Christened in 2003, the Time Warner Center’s two towers soar 750 feet above Columbus Circle, offering vistas of Central Park and the urban landscape matched by few addresses in the city. And perhaps the most majestic views from the property belong to its glass-walled penthouses, so it’s little wonder that Related founder and chairman Stephen Ross and his wife, jewelry designer Kara Ross, decided to acquire a top floor for their own home. To enjoy a panorama this astonishing, most folks would have to visit a public observation deck or a soaring office building, but for the Rosses, it’s the stuff of daily life—endless sky in daytime, a dark mirage of twinkling lights at night, with innumerable shifting moods in between.

But even if, as Mae West famously said, too much of a good thing can be wonderful, it’s also true that views as splendiferous as these can present special challenges, particularly in the quest for coziness. So even before the building was completed, the Rosses began working with New York designer Tony Ingrao and his partner, Randy Kemper, to figure out a floor plan and design scheme that would conjure a sense of warmth and security while also bringing a luxuriousness to the interiors that those singular vistas demanded.

“You have to create a human scale and feeling inside all that glass,” says Ingrao. “Being right above Central Park is fantastic, but people still want to feel grounded and protected.”

The Rosses were very much of the same mind. “My husband and I love modern, but not harsh modern,” Kara says. “It can get a little cold and stiff. We wanted a place where you could relax and take your shoes off.”

Ingrao’s decorative strategy in many ways mirrors Kara’s approach to jewelry design, most notably her melding of rarefied materials with rawer, more humble ones. (Ingrao also devised the jeweler’s namesake Madison Avenue shop in 2013.) No stranger to diamonds and gold, she is also known for incorporating unexpected stones and minerals, such as hemimorphite, jet,chrysocolla, and volcanic rock, often mixing several in a single necklace or bracelet. She has made hand-carved trays for President Obama and wood bracelets embellished with sterling silver and gemstones for the First Lady, all integrating magnolia wood from branches that had fallen onto the White House lawn. She has even fashioned a necklace out of concrete and diamonds.

“You have to create a human scale and feeling inside all that glass. Being right above Central Park is fantastic, but people still want to feel grounded and protected.” 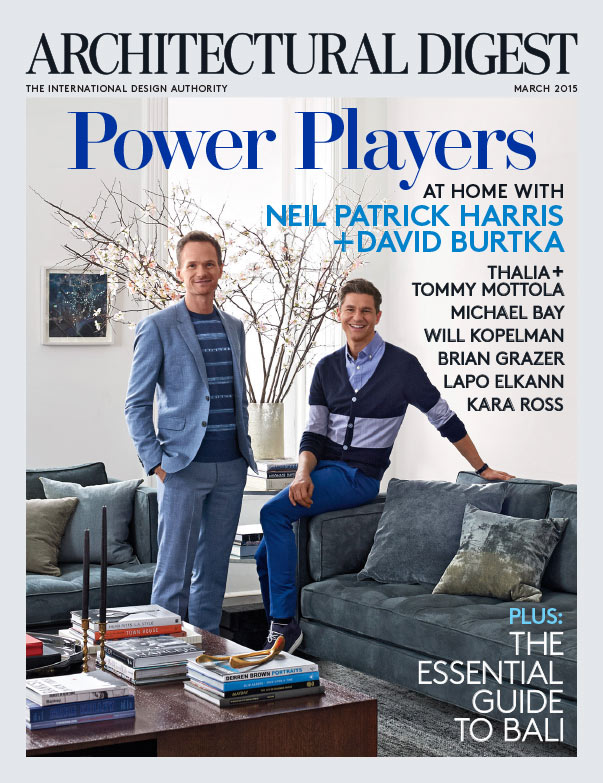 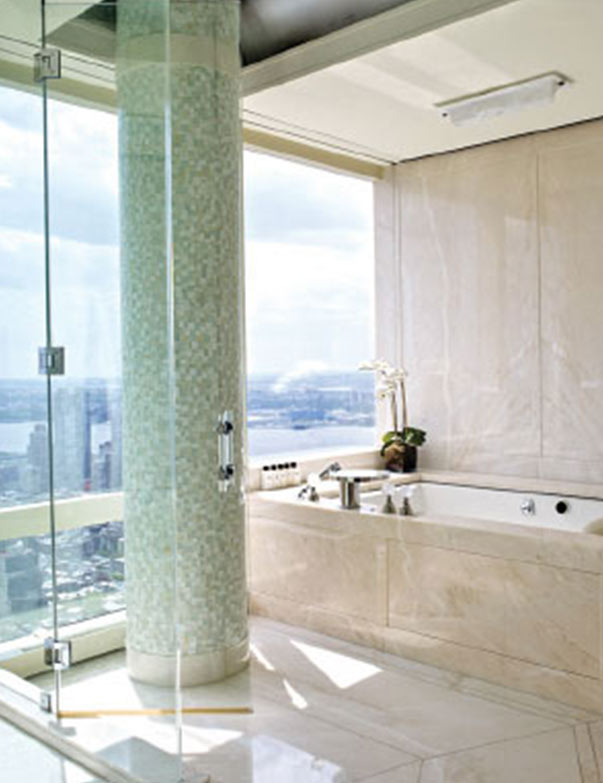 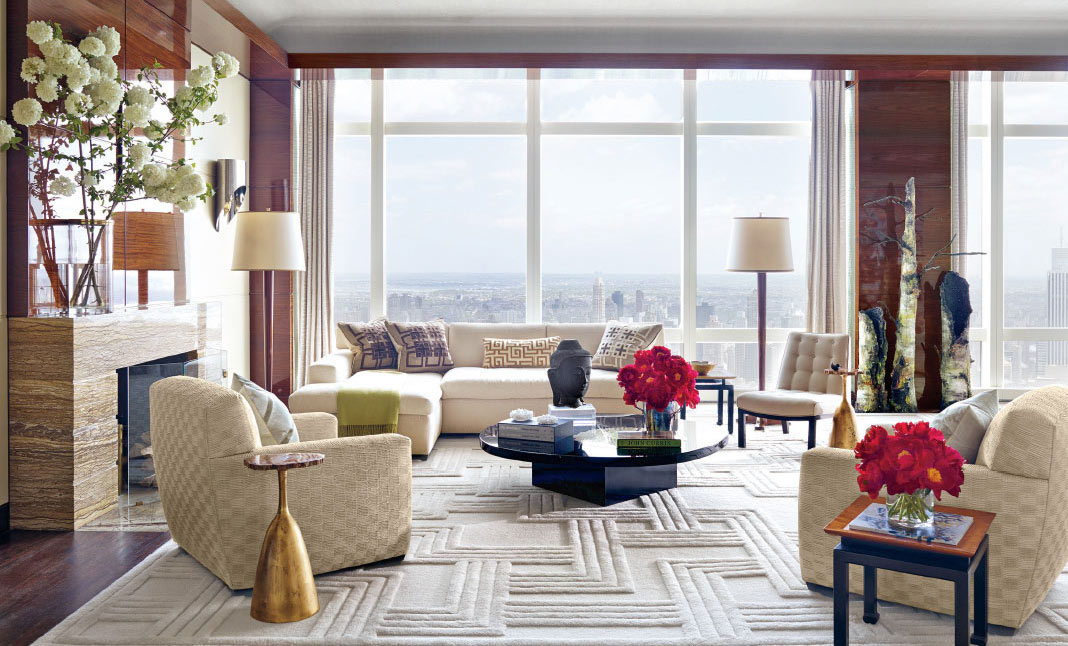 With no shortage of concrete on the mean streets below, the four-bedroom apartment embraces the diamond end of the jewelry designer’s aesthetic spectrum. The entry, extravagantly inlaid with different kinds of stone, sets the tone for the home, but the blend of exotic materials doesn’t stop there. The floors throughout are a dark-reddish African bubinga wood. Doors, beams, and moldings have been rendered in padouk, a tropical wood from Asia. Walls are elaborately paneled, plastered, tiled, or upholstered. Highly textured carpets and fabrics, most of them keeping to a warm, natural palette of browns, rusts, caramels, and creams, enrich the deftly imbricated compositions.

“I love working with unusual materials and making unexpected combinations, both jarring and subtle,” Kara says. “Tony and Randy took that concept and ran with it. Their finesse in layering colors, finishes, and textures gives the apartment incredible depth.”

The woodwork and furniture recall the heyday of 20th-century French design, when masters like André Arbus and Émile-Jacques Ruhlmann made an art form out of streamlining classical silhouettes into fresh, lyrical visions of modernity. For the Rosses, Ingrao chose French Deco pieces by Eugene Printz and Jules Leleu; 1960s and ’70s designs by Karl Springer and Maria Pergay; and some brand-new ones from Parisian maestro Hervé Van der Straeten.

Indeed, there are a number of touches that give the apartment a lively contemporary spirit, including several specially commissioned works of art. A whimsical large-scale Tim Berg wall sculpture featuring a quartet of orange Creamsicle bars brightens the media room with Pop Art cheek. In the living room a cluster of papier-mâché birch tree trunks by Kim Krans, whose work Kara had first seen at Art Basel Miami Beach, is installed opposite a wall-size canvas by Barnaby Furnas. And a life-size (and eerily lifelike) Marc Sijan sculpture of a security guard commands the entry.

Throughout the apartment are other surprising flourishes, like the powder room with LED lighting that can change colors with the flip of a switch and the giant concentric circles, made of nickel, that are inset into doors. Then there’s the dining room’s amazing handblown chandelier. Custom designed by Kemper and created by glass artist Martin Megna, it’s about as festive as a light fixture can get.

“I am always drawn to working with artists and artisans to craft extraordinary pieces,” says Kara. “When you’ve witnessed the creative process behind the works, they look and feel so much more special.”

But while the apartment’s treasures make it a home, Kara says that, in the end, nothing can compete with the views. “Living above Central Park like this feels like you’re actually living in the park,” she says. “It’s as if you’re in a painting that’s always changing, from green to yellow to red to gray and slowly back to green again. It has a kind of power that most art can only dream about.” 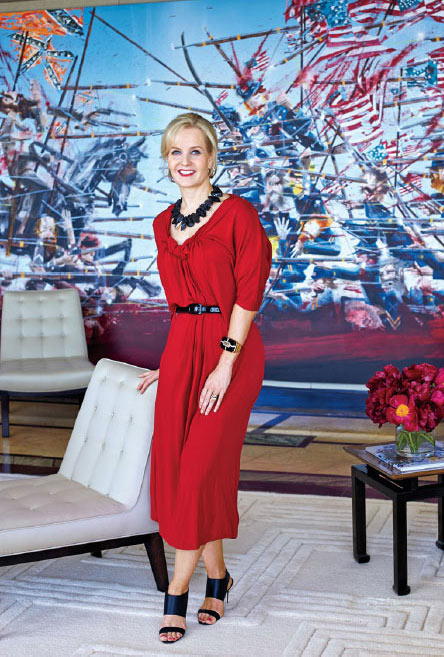 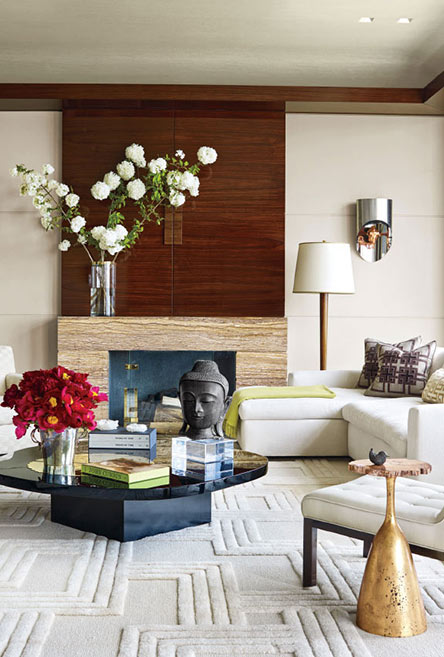 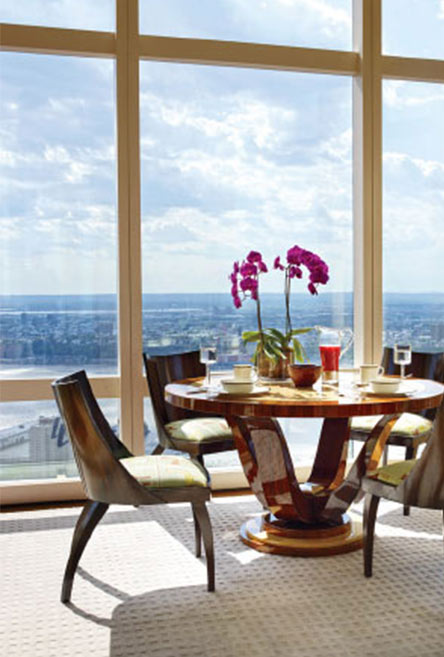 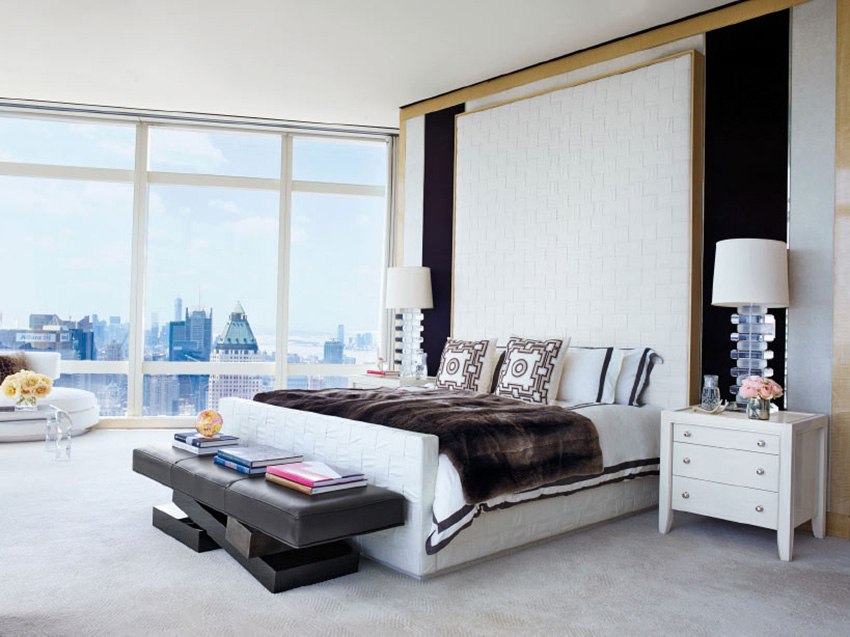 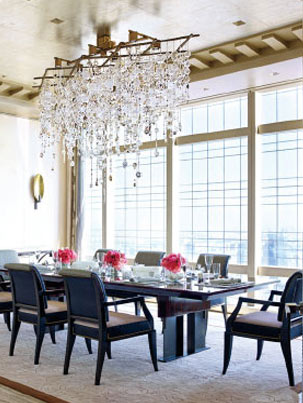 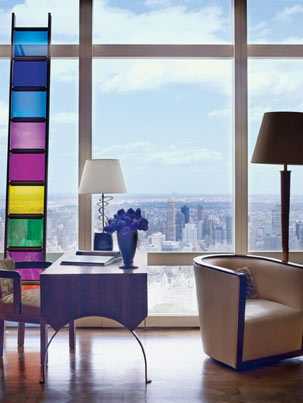 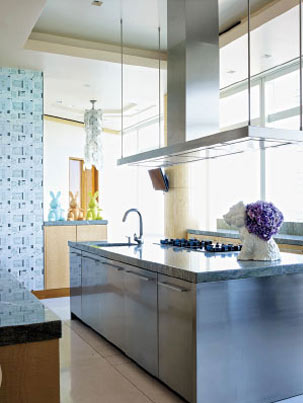