Design comes to life at the East End estate of Tony Ingrao and Randy Kemper.

It’s hard to succinctly describe the work of Tony Ingrao and Randy Kemper. Landscape designers, landscape architects, interior decorators, garden designers: Though each term applies, none alone quite fits. Ask Ingrao and Kemper, and they will say they are “lifestyle designers.”

The two, partners in business and in life, are sought out design experts, both for interior and exterior. They construct interiors, exteriors, gardens and in reality, lives. “We try to understand what our clients are trying to achieve in their own lives,” says Kemper. “It’s not about just adding some furniture or putting some lamps here and there. Our clients are usually at a transitional point when we start with them, so for us, it’s an enormous responsibility.”

Although the two maintain a work studio in New York City as well as an apartment, Ingrao and Kemper call East Hampton home, most specifically Woodhouse Park, a u-shaped, 5-acre parcel and residence named after original owners Lorenzo Easton Woodhouse Jr. and his wife, Mary Kennedy Woodhouse. It was here that the Woodhouses built “The Fens,” a magnificent estate that was once one of the jewels of this privileged summer colony.

Though the main building was long gone eight years ago when Ingrao and Kemper purchased the grounds, along with the carriage house, they transformed what was mostly marshy land into their own secret garden, and an outbuilding into an open, airy, meandering country cottage. Their initial parcel was 3.5 acres, but they subsequently bought an additional 1.5 acres from the neighbors to the front, who live in what is commonly called “the Playhouse,” built for the Woodhouses’ daughter. In that era Mary Kennedy Woodhouse was determined to become the supreme benefactor of the town’s social set (her husband’s uncle and neighbor, Lorenzo G. Woodhouse Sr., had been an investor and partner in Marshall Field and Company).

So, in carrying out her philanthropic bent, Mrs. Woodhouse, one-upped Lorenzo Easton Woodhouse and his wife, Emma, who had supported the East Hampton Free Library and had a hand in founding the Maidstone Club. Mary donated heavily to private schools and in 1931 built Guild Hall and its John Drew Theater located just down the road.

In the wake of this creative spirit, Ingrao and Kemper have created their own environment, with a decided nod to the comforts of Old World Europe. Stacks of large design books abut club chairs; an assortment of hats hangs in the hallway near the guest bedrooms, over a pair of broken-in riding boots (Kemper is a lifelong equestrian who trains at the nearby Sagpond Farm.) Pastoral scenes transform the walls; a tall, thin crackled red dish cupboard found in the back of an antique store finds a place in the kitchen; two-sided salt cellars in dark green colored glass adorn the dining room table, whose room was transformed from a garden shed; and a rectangular liquor cabinet is built into the hallway wall. The interior is reminiscent of films like The English Patient or The Golden Bowl, only this is not a staged house: Ingrao and Kemper haven’t “designed” their own home so much as watched it evolve.

“We obviously care a great deal about our environment—because it’s nurturing,” says Kemper. “How you feel about your home builds your self-worth.”

Ingrao chimes in: “We’re very interested in having the home and environment merge. This house is that; it lives out and in.” To fulfill that mission, sliding doors were added on either side of the main salon which open wide in the good weather. A fireplace on the right side of that room warms the space, regardless of whether it’s being used. Beams that look like they’ve been there all along were inserted into the ceilings of each room, and a small L-shaped staircase was installed in the entryway, creating an abrupt yet justified feeling. “It feels like a very whole environment,” Ingrao continued. “The entire experience is what we’re after, so that it all makes sense.”

“We try to understand what our clients are trying to achieve in their own lives. It’s not about just adding some furniture or putting some lamps here and there.”

Their clients range from Saudi Arabian royalty to Baccarat’s Hotel & Residences (set to open in Manhattan in 2014). It might be his sense of adventure along with extensive formal and self-education that has brought Ingrao success. While studying finance at Drew University, he traveled to London and Brussels, where he visited homes in the countryside, falling in love with the designs and architecture. Ingrao’s plans to become a lawyer soon dissolved, and at the urging of a professor, he enrolled in the Rhode Island School of Design to study architecture. His career started when he moved to France, and at the age of 25, took on the restoration and overhaul of an 11th-Century abbey while he was living in the Luberon region. Thirteen years in France followed, a time that continues to influence his design aesthetic to this day.

Kemper also spent five years in France, after a year at Parsons School of Design. He quickly landed a position in Paris at the lauded house of Givenchy, followed by two years at Bill Blass in New York before launching his own line. Kemper was widely featured in the fashion press in the late ’80’s and early ’90s and dressed prominent society members and famous names, including Katie Couric and Hillary Clinton, who wore his clothing at the first Clinton inaugural ball and while in the White House.

Today Ingrao and Kemper take clients shopping in Europe, and their work keeps them traveling extensively, to Honolulu, Santa Barbara and the Middle East. But East Hampton always beckons. Cross through the front gate of their Hamptons estate and you are enveloped in the expanse of manicured lawn and plantings, with virtually every type of tree and bush imaginable: Monkey Puzzle, Japanese Maple, Sycamore and Hinoki Cypress. A giant sheared beech holds court on the front lawn, brought in on a boat from Rhode Island, with another in the center of the circle at the driveway’s end. More than 1,000 total trees fill Ingrao and Kemper’s garden.

A stone path leads around the side of the house to the entrance. Two brick pillars topped with lion sculptures flank the entrance to a fountain surrounded by stone seating. A dining area is located off to the right, and to the left, steps lead up the main lawn where variegated boxwoods punctuate the property along with statues from great estates the world over. Ingrao and Kemper try to achieve a harmonious synchronization with their garden and home design. Although they admire the formality of French gardens—and the wild and wispy nature of English gardens—the two find the gardens of Belgium more of a hybrid, and much more entertaining. “They are very natural but possess much more texture,” Ingrao says of the Belgian aesthetic. Their property follows suit: It rolls and climbs, leading visitors while asking, telling, and surprising along the way.

Statuary is another obvious love of Ingrao and Kemper. A large decorative stone arch sits at the curve of the front drive. The back lawn is dotted with a variety of sculpted accents, some animal, some human. At the entrance to the pool lies a stone gazebo with a terrace. It rests on the top of a small hill and is in in an idyllic spot to take in the view beyond. Ingrao and Kemper play with the land as if it were a giant chessboard, the chess pieces being trees, plantings and statues—focal points and counterpoints.

Kemper already said it—their home is far more than a collection of furniture and lamps. It is an inspiring backdrop for two creative minds and their very full life together. 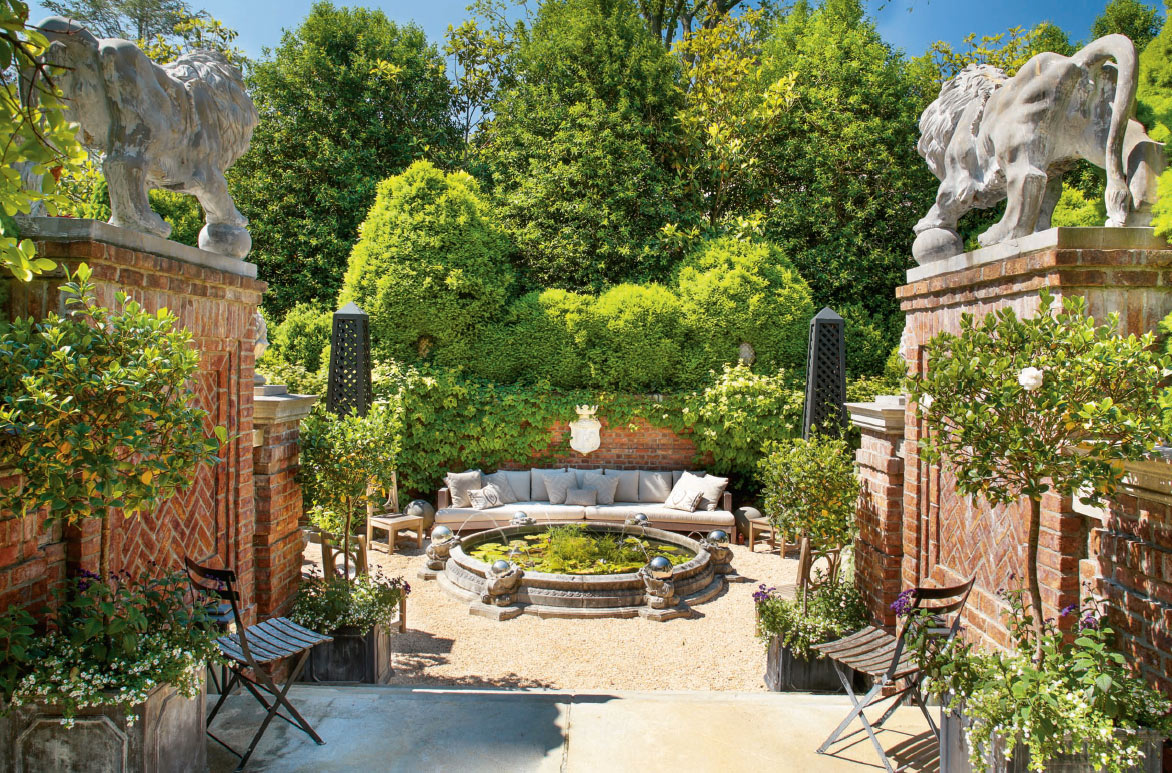 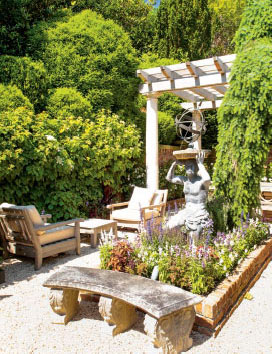 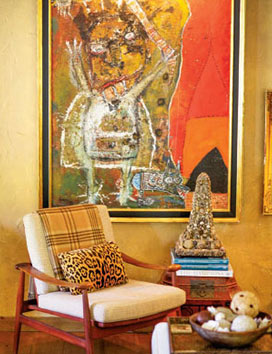 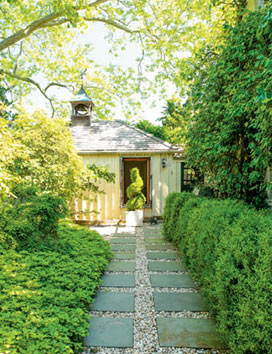 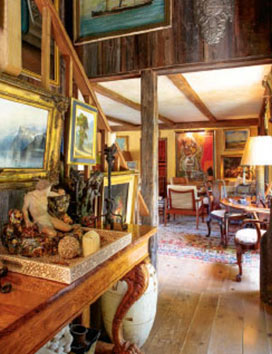 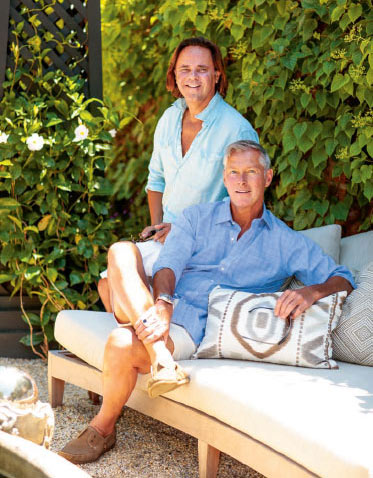 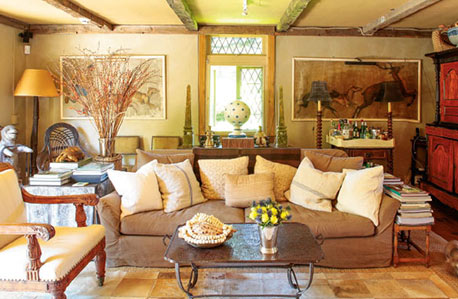 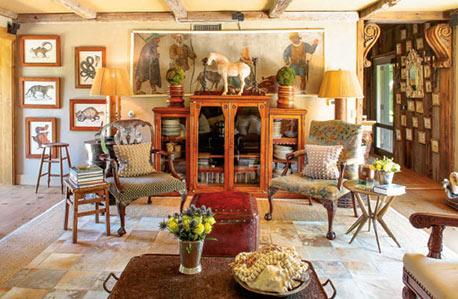 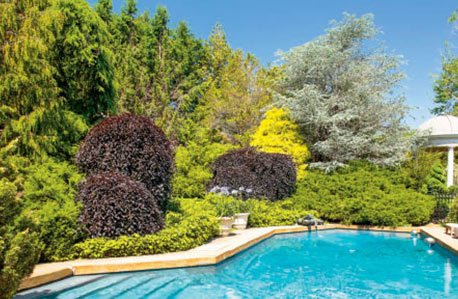 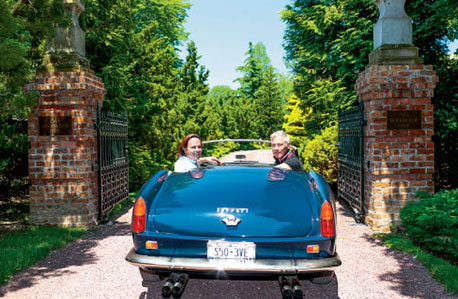